An Analysis of Data Propogation Latencies in the Ethereum 2.0 Medalla Testnet

Ethereum 2.0 is the new version of the Ethereum blockchain, where consensus (agreement of which data and blocks are to be be added) is to be achieved through proof-of-stake (PoS) consensys protocol. Coordination of consensus and many other processes in Ethereum 2.0 will be carried out by a chain referred to as the beacon chain. The beacon chain which processes and immutable writes on the blockchain various types of data, including proposers, attestations, slashings, deposits, and voluntary exits. The Medalla testnet of the the Ethereum 2.0 network provides ample data, which can be analyzed for measuring and improving the performance of the network.

An important performance metric category is data propogation latency, which refers to the latency (delay) in propogating data on the network, as the immutably including/writing/recording of the data on the chain as the final output. This article presents a visual analysis of data propogation latencies (delays) in the Medalla testnet, focusing on the average inclusion distances (delays, latencies) in each epoch for attestations.

As a methodological contribution, our article demonstrates how latency data can be visually and statistically analyzed. The data analytics methodology presented here can be applied not only in analyzing data from the Ethereum 2.0 mainnet, but also for analyzing data from any blockchain network.

“Every second is of infinite value.” Johann Wolfgang von Goethe 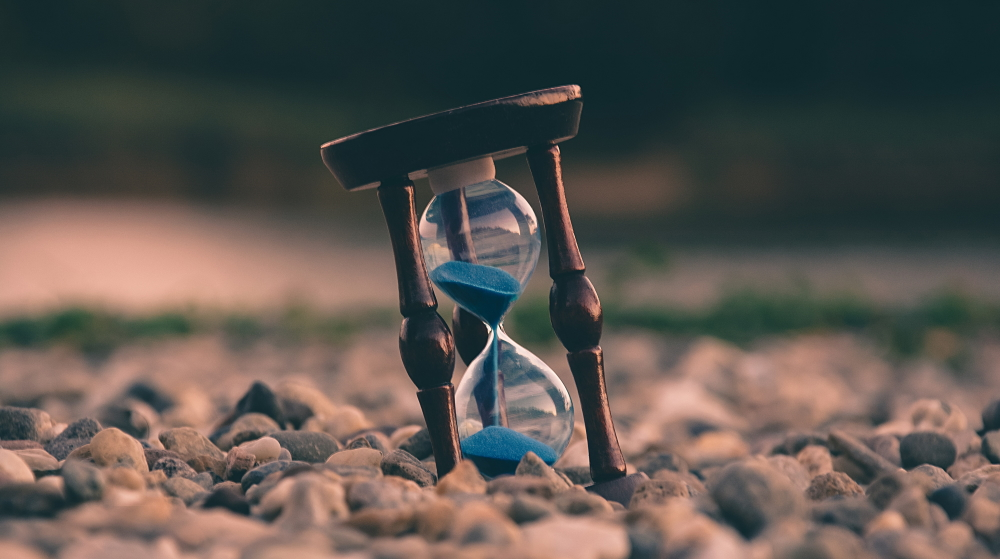 Photo by Aron Visuals on Unsplash

An existentially inevitable milestone in Ethereum’s journey to become “The Infinite Machine” is Ethereum’s version 2.0, , i.e, Ethereum 2.0. Upon the completion of the three Phases of Ethereum 2.0, namely Phase 0, Phase 1, and Phase 2, Ethereum blockchain will be fully functional, achieving security and scalability. A comprehensive list of resources on Ethereum 2.0 can be found here.

The topic of this article is data propogation latencies, i.e., delays in propagating and including/writing/recording data, on the beacon chain, the primary chain within Ethereum 2.0, to go live with Phase 0. Specifically, the focus is the delays in the inclusion of attestation aggregations on Ethereum 2.0’s beacon chain. The analysis of data propogation latencies is a high priority analysis, that can help improve the performance of the network. The data schema for the database is provided here.

While the analysis in this article focuses on data from the Medalla testnet of Ethereum 2.0, the presented visual analytics methodology, as well as analysis methodologies by other researchers, can serve as a guiding example of how blockchain network data can be analyzed by blockchain engineers, auditors, and data engineers/scientists.

Ethereum 2.0’s architectural design has at its core the beacon chain, which coordinates the Proof-of-Staking (PoS) consensus protocol. An insightful article by Ben Edgington explains the functionality and working mechanism of the beacon chain. In [an earlier article](beacon chain that we prepared for submission to the Medalla Data Challenge, we provide a visual documentation of the data produced and stored for each beacon block of the beacon chain. As further reference, an excellent list of definitions for the various Ethereum 2.0 terms can be found from this Alethio article.

Before proceeding further, let us review some basic terminology for Ethereum 2.0, in relation to the PoS consensus process (Source):

While many details exits, we refer interested readers to two fascinating articles by Ben Edgington and Jim McDonald which describe the working mechanics of the beacon chain and Ethereum 2.0 overall.

Ethereum 2.0’s Proof-of-Stake (PoS) consensus protocol includes/writes/records blocks on the blockchain not simultaneously, but only after evaluating attestations, which are aggregated as attestation aggregations. For each slot, the attestations from different committees are included in the blockchain only after a certain delay, which can be referred to as inclusion distance (inclusion delay, inclusion latency, or other similar term).

While this metric is not directly measuring the time until the actual inclusion (which takes place with the first inclusion), it instead measures the time-wise inefficiency with respect to attestations and inclusions.

Our analysis is built on data from the Medalla testnet extracted using chaind API and shared in the form of an PostgreSQL dump, whose latest version can be accessed from here. The data was kindly shared by Jim McDonald on ethstaker Discord channel, under #medalla-data-challenge group.

We run 2 basic queries where is row in the extracted data corresponds to a slot. The first query given below extracts from t_attestations table, and returns the minimum and maximum inclusion slots (min_inc_slot_over_committees and min_inc_slot_over_committees, respectively) over all committees, and then takes their difference slot_diff_over_committees as the actual inclusion distance for that slot. While other data was also extracted regarding each epoch, eventually we used only the data from the fields f_slot (which we refer to as Slot in our analysis) and slot_diff_over_committees (which we refer to as InclusionDistance).

The first query is as follows:

The second query extracts data from multiple tables, namely t_blocks, t_proposer_slashings, t_attester_slashings, and t_voluntary_exits. Again, each record (row) corresponds to a slot. The extracted records have as fields the proposer for that slot, as well as the binary attributes that denote the presence/absence of attestations, slashings, and voluntary exits. Rows with null values for slashings were assumed to be slots with missing blocks.

The second query is as follows:

After the execution of the above two queries and extraction of data as records in two separate output tables, the results were then merged in a single table using a Google Sheet and the VLOOKUP function. We observed that analysis at the slot granularity could be misleading due to high variability. Therefore, we decided to continue with analyzing data at epoch granularity. Another observation was that for earlier epochs, inclusion distance and other data propogation metrics had reached to unreasonably high values. The same observation was reported in a related research. In turn, we decided to remove earlier epochs from our analysis and only focus on epoch 5000 onwards.

Eventually, the data used in our analysis was as follows:

The analysis of inclusion distance over epochs, as provided below, of time suggests that there may be trends overtime for both the average and standard deviation. 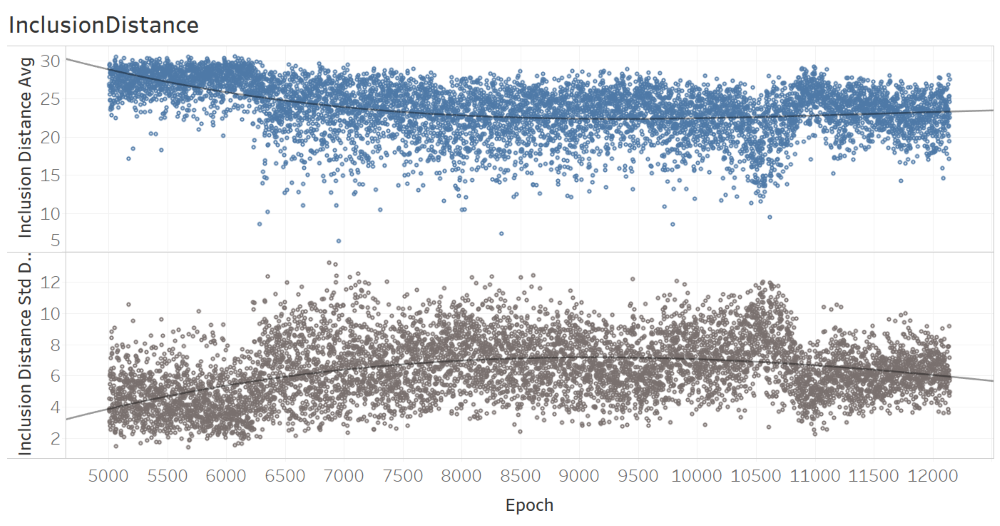 The next figure, which shows the number of AttesterSlashings per epoch, suggests that there were a maximum of 5 attester slashings in an epoch, with most epochs (with slashings) having only one slashing. 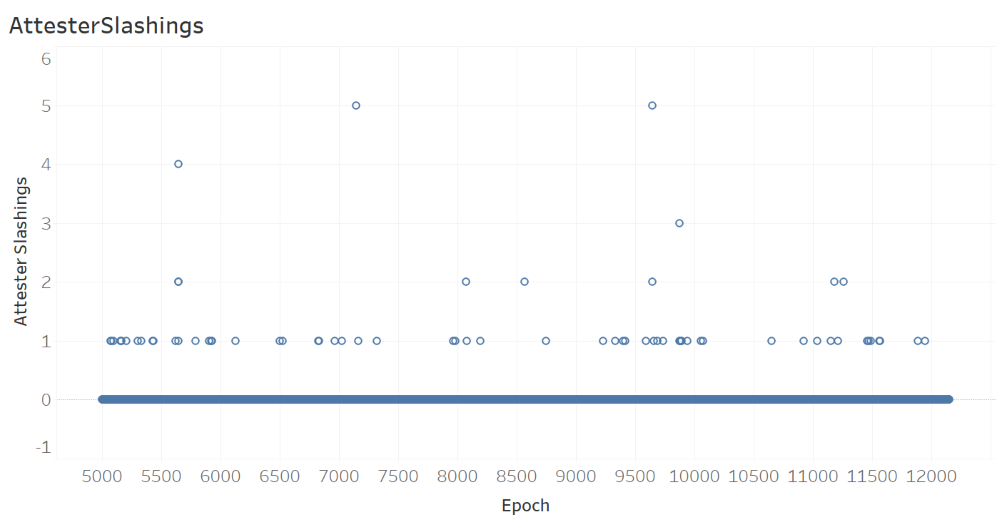 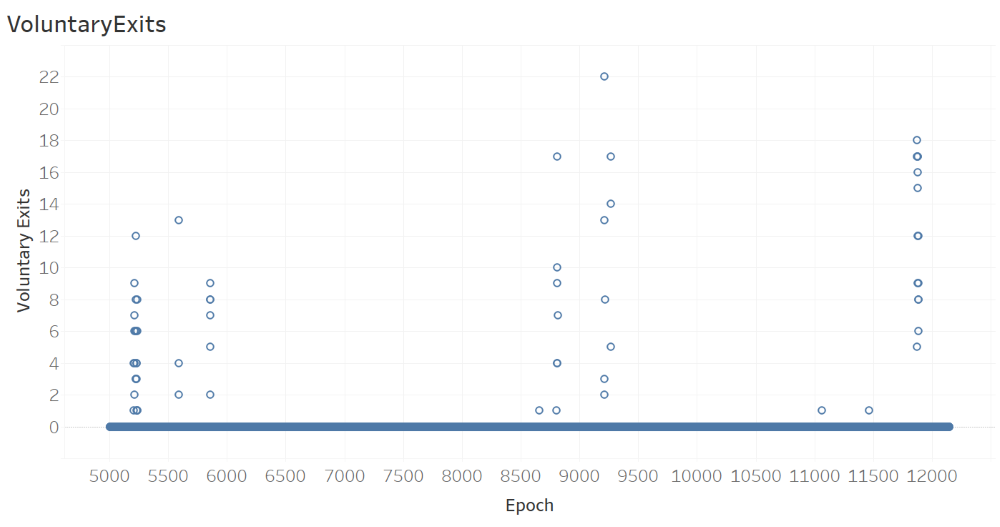 The next figure, which shows the number of missing blocks per epoch, does not suggest any trend over time. 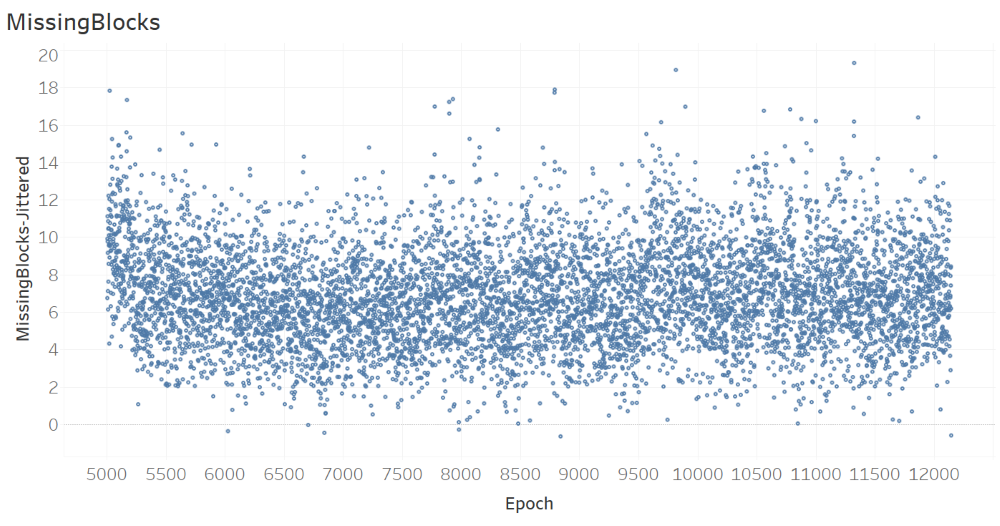 The next figure, which plots only the observations with average inclusion distance average greater than 14. The scatter plot and the successive trend analysis suggest a polynomial functional form that can model the relationship between the two attributes. The fitted polynomial function is provided right below the figure. x is the attribute (InclusionDistanceAvg) on the x axis and y is the attribute (InclusionDistanceStdDev) on the y axis.

The next figure, which plots average inclusion distance InclusionDistanceAvg against the jittered values of number of committees NoOfCommittess-Jittered. As evident from the attribute name, the values on the x axis are jittered to enable better insights. The scatter plot and the successive trend analysis suggest a polynomial functional form that can model the relationship between the two attributes. The fitted polynomial function is provided right below the figure. Yet, it should be noted that this curve, suggested by Tableau software, is based on the jittered values of NoOfCommittees, and hence is not accurate. x is the attribute (NoOfCommittees-Jittered) on the x axis and y is the attribute (InclusionDistanceAvg) on the y axis. 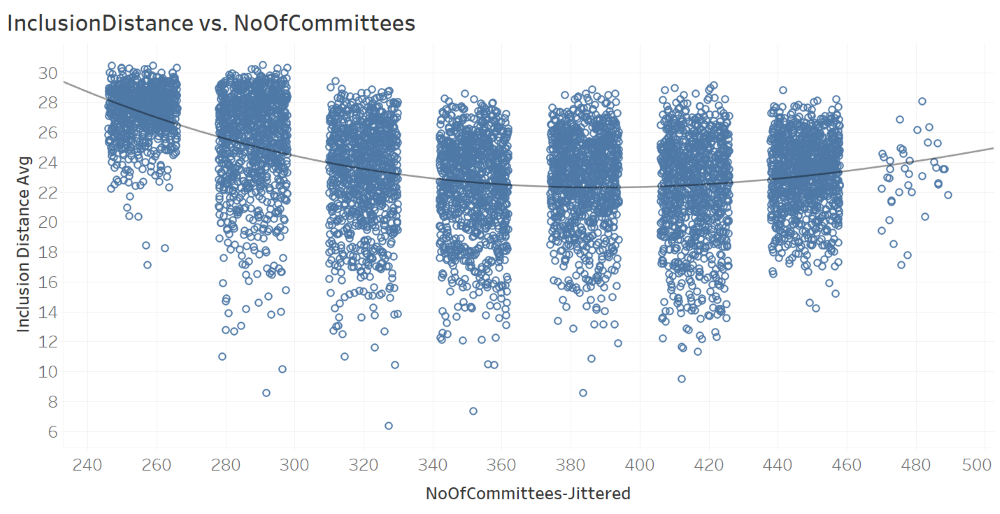 The scatter plot and the fitted function in the above figure suggest differences in mean InclusionDistanceAvg values across different values of NoOfCommittees. To this end, box plots have been drawn, where the dependent variable/attribute is InclusionDistanceAvg and the categorical independent variable/attribute is NoOfCommittees (the box plot on the left hand side below).

Since the box plots make the differences in means even more visible, as the next step, formal hypothesis testing has been conducted. The null hypothesis is that the mean InclusionDistanceAvg values across different values of NoOfCommittees are equal across each pair of values of NoOfCommittees (ex: (256, 288)). The alternative hypothesis is that there are statistically significant differences in means. Since at least one of the subsamples is not normally distributed, the non-parametric Dunn test with Bonferroni correction is a suitable test. The table below shows the results of Dunn test obtained using Python’s scikit library, with a threshold p-value of 0.01.

Since it may not be straightforward to visually observe stochastic dominance patterns from the table, we apply the graph-based methodology of Ertek et al. (2019) to visualize the Dunn test results:

The yEd graph drawing software by yWorks was used to create the graph: 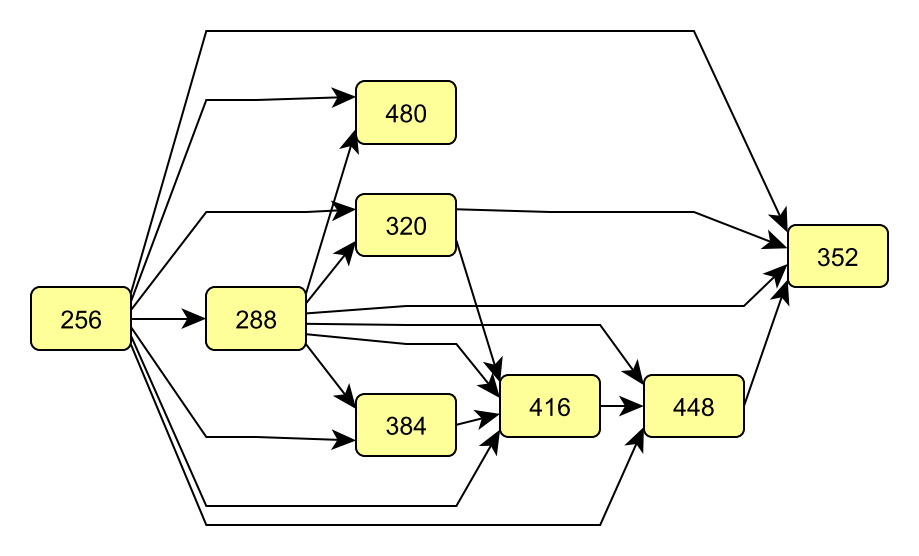 From the graph, it can be seen that when NoOfCommittees is 256, InclusionDistanceAvg takes the largest values with statistical significance. Therefore, ceteris paribus (all else being unchanged), this value as the NoOfCommittees (which translates into 256/32=8 committees per slot throughout the epoch) does not seem favorable. On the other hand, NoOfCommittees being 352 (which translates into 11 committees per slot throughout the epoch) seems to give the least InclusionDistanceAvg. Therefore, the value of 11 seem favorable as the number of committees per slot, throughout the epoch. Yet, there are certain other considerations, such as the committee sizes and the epoch, to be taken into account before a solid recommendation. Actually, these three are all tied to each other, because each validator is expected to serve as attester exactly once in each epoch. Still, we can conclude that committee size is associated with inclusion distance.

Similar to the analysis of InclusionDistanceAvg against the NoOfCommittees, a similar analysis was conducted for InclusionDistanceStdDev, whose scatter plot and best-fit polynomial function are provided below. Due to space considerations, the full analysis on this is not included in the article. 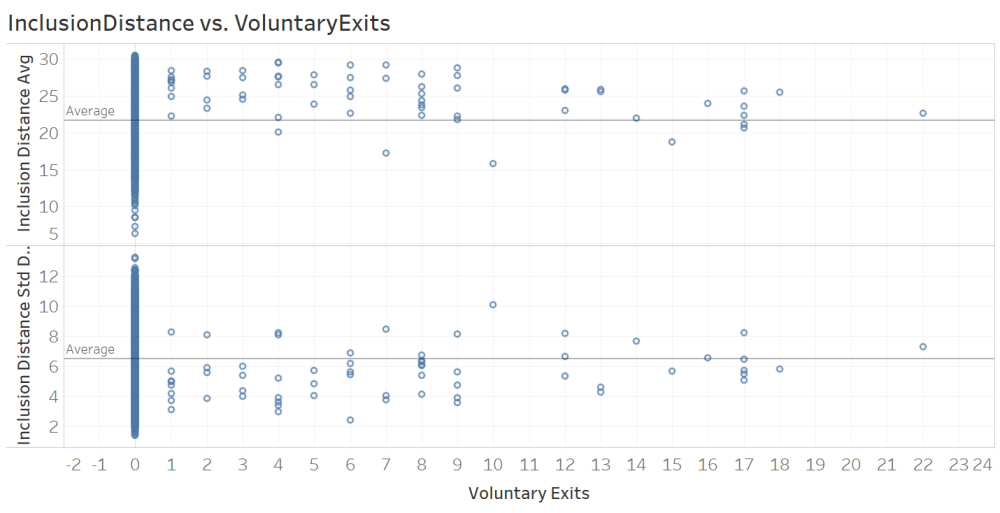 Our earlier analysis revealed an inverse relation between InclusionDistanceAvg and InclusionDistanceStdDev; thus, it is enough to focus only one of these results. Without loss of generality, we focused on the first observation and conduct formal statistical hypothesis testing.

In order to be able to decide whether we could use parametric tests, we conducted Shapiro-Wilk test of normality. At threshold p-value of 0.01, for one of the subsamples (corresponding to the case where there are one or more voluntary exits), the null hypothesis for normality was rejected. Therefore, we continued with non-parametric Mann Whitney U test for comparison of sample means between two samples.

Mann Whitney U test gave p-value < 0.01, thus the null hypothesis (that the two samples have the same mean) was rejected. The randomly selected InclusionDistanceAvg value of the first population (no voluntary exits) is considered to be not equal to the randomly selected InclusionDistanceAvg value of the second population (at least one voluntary exit). Therefore, we can conclude that voluntary exits are positively associated with average inclusion distance.

Combining visual analytics and statistical methods, our research presented in this article brings fresh insights into data propogation delays, specifically into attestation inclusion distances, in Ethereum 2.0’s Medalla testnet. As a methodological contribution, our article demonstrates how latency data can be visually and statistically analyzed through an integrated workflow. The data analytics methodology presented here can be applied not only in analyzing data from the Ethereum 2.0 mainnet, but also for analyzing data from any blockchain network. As a practical contribution, our research reveals several insights (at epoch granularity) that can be further investigated for improving the data propogation performance of Ethereum 2.0.

We thank the authors of all the resources used in the article, as well as the Ethereum Community and Foundation. We especially thank Jim McDonald for sharing the data used in the article and answering our many questions, Ben Eddington for his rigorous documentation, pintail for openly sharing his analysis with the ethstaker community, and Butta.eth for answering our questions on ethstaker. We also thank Ivan Liljeqvist and the Ivan on Tech team for creating a thriving community and motivating blockchain content.

Sign up to receive updates and analyses from us in the future: